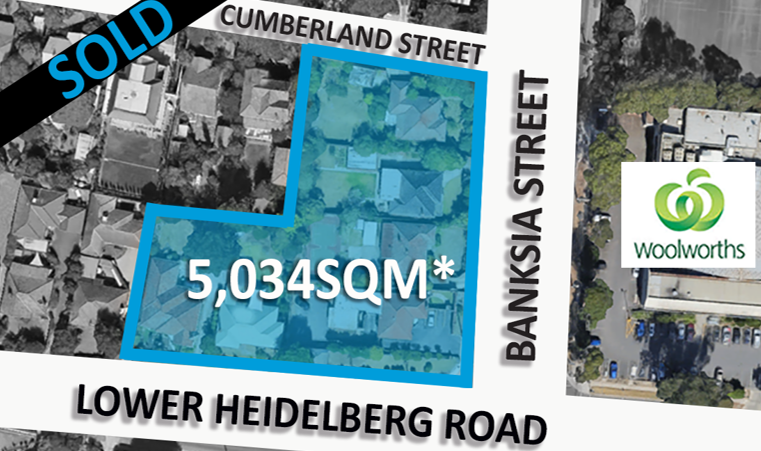 A developer is planning a mixed use project with apartments and a child care centre, after paying $12.82 million for the L-shaped Eaglemont parcel.

A developer is paying $12.82 million for an Eaglemont block at the busy south west corner of Banksia Street and Lower Heidelberg Road, opposite a Woolworths supermarket.

The strategy worked with the incoming owner expected to replace the amalgamated with a major mixed-use village comprising apartments, retail and a childcare centre.

The properties, 25-31 Banksia Street and 437-439 Lower Heidelberg Road, are on land zoned General Residential 2, which would allow for a three storey redevelopment.

Heidelberg’s popular Burgundy Street retail strip (pictured, top) is 400 metres away. The block is also walking distance from the Heidelberg train station, a kilometre from the Austin Hospital and Warringal Private Hospital, and two kilometres from Heidelberg Hospital.

Also close to Ivanhoe Grammar and Marcellin College, Eaglemont carries a median house price of $1.74 million according to realestate.com.au.

Block had been on the block for two years, via three agencies

The block would look familiar to those active in the metropolitan development site game – being for sale off-market last year, via a different agency – but only as four homes (25-31 Banksia Street, on 3493 sqm of land forming a rectangle shape).

In 2017, these same four homes were for sale with another agency – that marketing campaign, said to have cost more than $40,000, resulting in multiple For Sale boards stretching a block of the length  of Banksia Street for months.

Two years ago the offering featured on a current affairs show – being one of the first development sites formed by neighbours banding together, to attract large-scale builders.

Since then, we have reported about several building blocks created this way, and selling for premium prices, including in Box Hill and St Kilda.

Eaglemont site was competitively received this time around

The return of buyer confidence – for both metropolitan development sites, and apartments – resulted in a competitive marketing campaign this time around, Mr Latos said.

The fundamentals of the location – Eaglemont being one of the north east’s most exclusive pockets, well serviced by amenity and transport, and 10 kilometres from the city – was another.

Mr Latos said five formal offers were received after the property was advertised for private sale a couple of months ago.

“The sale price is a record for the suburb of Eaglemont and is a clear sign that there is strong demand for substantial residential development sites in the inner and middle ring residential markets,” the executive added.

“The vendors are delighted with the result and the purchaser has also done very well to secure such a rare offering in a blue chip suburb.